Monday, January 22, 1900 was a happy day around the office water cooler, or wherever American workers congregated at the turn of that century, since the water cooler was still six years from being invented.

The smiling faces were tied to the fact that the average American’s tax burden for 1900 was paid up with earnings through that third Monday of that New Year, of that new century. The rest of that year’s earnings were actually theirs to use as they needed or desired. Flash forward to 2016: you just finished filing your federal and state tax returns (most of us) and you breathe a sigh of relief, just as your long ago ancestors did in 1900. Oh, but you sigh too soon, my friends.

Uncle Sam and a slew of state and local taxing agencies will continue to chip away at your 2016 income through “Tax Freedom Day,” which is the day the nation as a whole has earned enough money to pay its total tax bill for the year. “Tax Freedom Day” is calculated by the Tax Foundation, a nonpartisan tax research group based in Washington, DC. In 2016, “Tax Freedom Day” will be April 24. Through that date the average American’s total gross earnings in 2016 will go to pay their tax burden to federal, state, and local tax bodies.

Location, location, location is a key in real estate and in taxes, as “Tax Freedom Day” varies by state. You might think that those lucky souls in states with no state income tax, e.g. Alaska, Florida, Nevada, South Dakota, Texas, Washington, and Wyoming enjoy the earliest release from their tax burden, but the winners in this race are actually residents of Mississippi (April 5), Tennessee (April 6), and Louisiana (April 7). At the tail end of the race are residents of Connecticut (May 21), New Jersey (May 12), and New York (May 11). Of the seven states with no state income tax, Alaska has the earliest “Tax Freedom Day” in 2016 on April 10 and Washington has the latest on April 27. For all of our Illinois clients, you will be working through April 29 to satisfy your 2016 tax bill.

Delawareans and Indianians will be wearing the extra wide smiles on April 18, as they get to celebrate the filing of their 2015 taxes and their “Tax Freedom Day” all in one!

Whenever you personally reach “Tax Freedom Day” in 2016, we wish you the greatest of prosperity for the rest of of the year, now that you actually get to choose to use or keep the fruits of your labor. 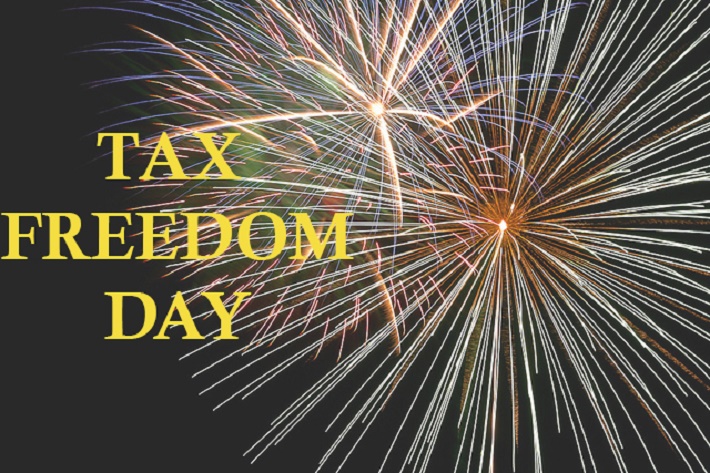